How many calories do you burn Running? 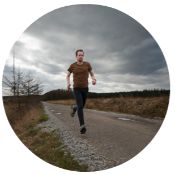 The fact that running and jogging is healthy for you is widely known and recognized. There are conflicting views, however, on whether you can lose weight by running. What we do know is that running is one of the most practiced sports in the world. And that’s obvious because you only need a pair of running shoes and sports clothing. It’s easy to start with and you can run almost anywhere.

There are different ways of running. On top of the standard single-tempo runs, there are interval runs, endurance runs and sprints. This article is about the most practiced type: recreational running or jogging.

What are the advantages of running?

As mentioned before, running is good for your body. What are the most important advantages running has to offer for your health? We’ve listed the seven down below:

How to lose weight by running

Losing weight requires you to burn more calories than you consume them. Running burns lots of calories because you use a range of different muscles, from the ones in your upper as well as lower body. Especially running in intervals tends to burn more.

Researchers at Harvard University have looked into how easily you can lose weight by running compared to other sports and activities. The research shows that you burn a relatively large amount of calories. An average person burns 372 calories by walking 30 minutes at 6 mph. You burn that much with 30 minutes of intensive swimming or playing basketball.

The more intensely you train, the better the advantages. The ‘afterburn effect’ allows you to burn a few calories for a while after your workout. Furthermore, you tend to have a lessened appetite after an intense exercise session, which leads to eating less.

Finally, another advantage of running for your health is that you burn unhealthy fats while exercising at an average intensity. Running is good for your health!

Whether you’ll lose weight once you start running is a difficult question to answer. This is because you gain the muscle mass that replaces your burned fat, which is relatively lighter than muscles. This can cause your weight to increase.

How many calories do you burn by running?

How many calories do you burn during 10 miles?
If someone of 180 pounds ran 10 miles at a speed of 8 mph they would burn around 1265 calories during the run.

How many calories do you burn running a half or whole marathon?
If someone of 150 pounds ran a half marathon at 6 mph they would burn around 1529 calories. For a whole marathon, the amount would double and the number of calories burned would be around 3058 calories.

How do you start running?

A common mistake that people make when starting with running is that they can get too enthusiastic. In the beginning, everything is exciting, there is a lot of motivation and the shoes and clothes are still brand new. These expectations for results may cause you to lose motivation quickly. Despite the initial excitement and motivation, many beginners do not manage to reap the rewards of running (such as losing weight and gaining muscles) in the long run.

You want to start with something small and achievable, something you can keep up for a while so that it becomes a habit. If you don’t manage to even get yourself out of bed to run after a while, we have a tip for you: Start with changing into your sports clothing first. If you manage to do that every day without forcing yourself to run, you’ll notice that you’ll go out willingly. This theory comes from the book: ‘Tiny Habit: The Small Changes that Change Everything’. We’ve tested this ourselves and can say that it does indeed work!