How many calories do you burn with Yoga?

Someone weighing 180 lbs burns approximately 266 kilocalories per hour with Yoga. Fill in the form and calculate how many calories you burn with Yoga or use our Calorie Calculator for other activities. 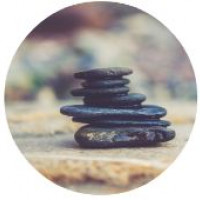 How many calories do you burn with Yoga?

Someone weighing 180 lbs burns approximately 266 kilocalories per hour with Yoga. Fill in the form and calculate how many calories you burn with Yoga or use our Calorie Calculator for other activities.

The number of calories you burn with yoga not only depends on your body weight, but also on the type of yoga you practice. Hatha yoga and Iyengar yoga are, in general, the ones that burn the least calories (about 160 kilocalories per hour for a 60 kilogram woman). If you want to burn more, you should choose other types of yoga.

Ashtanga yoga, also known as power yoga, focuses on executing various movements and adjusting your breath accordingly. This requires more energy from the body compared to Hatha and Ivengar yog. You will double the calorie consumption with this type of yoga.

Bikram yoga (also called hot yoga) is also a great way to burn a lot of calories. Due to the heating of the room, the body requires more energy to perform the yoga exercises. You can easily burn 300 kcal per hour (450 for a standard 90 minute session).

If you really want to use yoga to burn as many calories as possible, Vinyasa yoga (also known as flow yoga) is the way to go. This dynamic form of yoga burns more than 400 calories per hour with a large number of flowing movements.

Usually, performing yoga can help you burn around 100 to 600 calories in an hour, depending on the style, the pose, and the person. All Yoga styles are very different in their intensity and pace.

Hatha Yoga - Hatha is a very basic style of yoga taught at a slow pace. This is often the type of yoga used in beginner’s class. Hatha Yoga burns from about 180 to 220 calories per hour.

Bikram Yoga - Bikram Yoga, a type of Hot Yoga, is a physical type of Yoga where you do your yoga exercises in a temperature around 100 Fahrenheit. In a typical Bikram Yoga class you will do the same 26 Hatha Yoga positions in common order. Bikram yoga burns from about 350 to 450 calories per hour.

Ashtanga Yoga - Ashtanga yoga is a very intense and athletic form of yoga. Therefore it is a very good way to help you burn down some calories. With Ashtanga Yoga You will probably burn around twice as much as you will with Iyengar Yoga. Ashtanga yoga burns from about 250 to 350 calories per hour.

Vinyasa Yoga Vinyasa Yoga is a very dynamic way of practicing yoga and is one the most popular types at the moment. Vinyasa Yoga is also known as Flow Yoga. You will flow from one posture to the other. Vinyase yoga one of the types of yoga which will burn the most calories. Vinyasa yoga burns from about 400 to 500 calories per hour.

Hot Yoga Yoga performed in a very warm and humid room is called Hot Yoga. There are different types of Hot Yoga classes. During a standard class of Hot Yoga, the room is heated to approximately 105 F (40 C). The hot temperatures makes Hot Yoga an extreme intense type oy Yoga.

Iyengar Yoga Ivengar Yoga is a very popular type of Yoga, introduced by the Indian B.K.S. Iyengar. In a standard Iyengar Yoga class you will perform a variety of postures while controlling the breath, all at a very slow pace. Although it is not the most intense type of Yoga, you will definitely get a workout. If you are a beginner with Yoga, or If you have an injury, Iyengar is the best type of Yoga for you. Iyenga yoga burns from about 160 to 200 calories per hour.

How do we calculate the amount of calories burned with Yoga?

A person weighs: 180 lbs
MET value of Yoga: 3.1
Time: 30 minutes
The calorie calculation for Yoga for 30 minutes is as follows: